Come share your backwater or even blue water success and help others learn more about fishing from a 'yak.
Post Reply
8 posts • Page 1 of 1

I returned home after hours driving in a car, needed some air and a good stretch, so I walked down to the boat house where I keep a Meyers Sportspal S-15, a 15 ft. version of the 13+ footer shown here. About that later. But, before I go on, what I will say is most fishing kayaks aren't really kayaks any longer but some form of hybrid between one and something else. So, some of the Diablo kayaks have SUP (stand up paddle) and kayak genes; some NuCanoe models are more canoe than kayak, then you have the sit-in, sit on top, this and that. We have to get over a too tight definition.

So, I un-tethered my S-15, stood up and paddled approximately 1 mile to just beyond the Lake Athens (Texas) boat ramp, then back home again. I stopped and fished along the way, of course. But, the point I'd like to focus on was I was standing almost the whole way. Speed? I'd say walking pace which is usually defined as 3.1 MPH. Seated, I can go a bit faster of course.

Why might one choose this "canoe" over a "kayak" for a fishing platform?

1) My S-15 weighs 67 lbs., the S-13 weighs 57 lbs. Few fishing kayaks weigh this little. And, the models generally regarded as being super stable for standing and fishing? They generally weigh 100 to 175 lbs. I speak here of Jackson's Big Rig (I own one) and the Hobie PA 14 and Native Titan 13.5. Those three are HEAVY. While my Big RIG is stable, it isn't nearly as stable, not even close to my S-15.

2) Carrying capacity. An S-15 has a capacity of 705 lbs. My Big Rig? Around 450 lbs. as I recall. And, I have often taken out friends and relatives, two grown big men in the S-15, my big son and a grandchild making 3 of us in my Sportspal, so if you ever want to take along your wife, a girlfriend or boyfriend, an angling buddy? This wide canoe is the way to go.

3) Motor Options. Notice that I have pictured the S-13 here. It and the S-15 both have square sterns and come ready to mount outboard engines, maxes of 5 hp for the 15 and 3 hp for the 13. I don't have one but instead use a Minn Kota TM on occasion if I want to get over to a far away fishing spot. Normally, though, I go out without power, just a double bladed 280 CM paddle. If you want to stand and paddle, the extra length makes it a good choice for both seated and standing paddling.

4) Seat options. Oh sure, they talk about comfort for some seats in expensive kayaks. But, one can mount a swivel bass seat to the built in bench seats of a Sportspal, that, or what I often do is bring a simple folding lawn chair with bladed feet. If I don't need it, I can simply stand up and toss it behind me.

Why might I recommend an S-13 over the S-15? Well, for most standard trucks with a bed extender, you can carry it around a bit easier. No need for a trailer. And, there are YouTube videos of a friend of mine, Carl, who stands and fishes with another grown man. I'd imagine the S-13 achieves most of the advantages of the S-15. If you don't plan to ever drop a motor on, you could go for the S-14 or S-16, the double pointed canoes. They come with a side mount bracket for mounting a TM if you plan to limit yourself to that.

I could go on and on. One thing I am certain of is that being able to stand makes a huge difference in a number of fishing presentations. In most kayaks, at least a portion of your brain has to sort of "think" about maintaining balance. This simply isn't so in these Sportspals. I have crossed the deep portions of a lake with a 25 MPH wind blowing from the side, using my TM and standing with the tiller in my hand . . . and have never felt the least bit insecure. It is that stable.

Hope this helps someone. It could be, I think often will be, a best choice.

Brad (Nope, no affiliation with Meyers)

I've contemplated one of these numerous times. My only concern is durability. Aren't these made with extremely thin gauge aluminum? Aside from that, it seems perfect for solo trips. Super light and above average stability. I'd be on edge about putting a hole in it. What are your thoughts on this?
Top

The Meyers version is very stout. Mine is several years old and nary a dent. It shows no "oil canning" or flexing when I stand in it (>250 lbs.), when I grab a gunwale, or hang a large TM off its transom.

Very solid . . . but go with the American version. The Canadian version is lighter and I'd relegate it to more recreational usage.

Here, a stock photo of an older gentleman carrying an S-13. 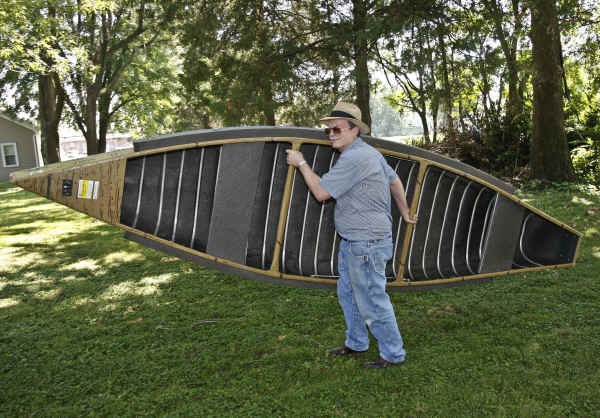 Another photo, this of an S-12 and a young, small female carrying it on her shoulder. 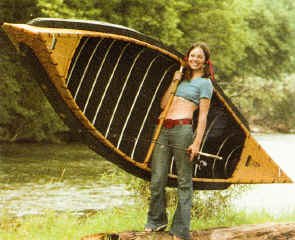 I'm pretty sure the OP was referring to Carl of Keeping It Reel Fishing. He's done a video going into detail why the Sportspal is such a great vessel. His content is also top notch.

Brad in Texas wrote:The Meyers version is very stout. Mine is several years old and nary a dent. It shows no "oil canning" or flexing when I stand in it (>250 lbs.), when I grab a gunwale, or hang a large TM off its transom.

Very solid . . . but go with the American version. The Canadian version is lighter and I'd relegate it to more recreational usage.

Here, a stock photo of an older gentleman carrying an S-13.

Can you tell me what the American version is called, and if and where it's available to source?
Top

The American version is made by Meyers. Just Google Meyers Sportspal and you'll see the website.

A lovely vessel for so many applications!

Very interesting concept, thanks for the review and posting. There have been a few times when I'd wanted to take a person with me kayaking, but didn't have a kayak. One of my main considerations when selecting a vessel was weight. I went with a Jackson Cuda LT and have been very happy with it.