How small is your rod and how light is your line? It's not about the size of your tackle, but how you work it. Come share your Ultralight fishing success here!
Post Reply
7 posts • Page 1 of 1

With my renewed interest in fishing ul for panfish and bass, I decided to look into buying some smaller, lighter trout spoons.
Stuff weighing between 1/32oz and under 1/8oz. In the past I went with Diawa Crusaders or Smith Native series spoons which are aces but I decided I didn't want to spend 5 or 6 bucks a pop. I had been hearing some decent things about inexpensive CDM spoons from AliExpress and decided I'd drop a few bucks down to test them out.

I've purchased 7 rods from Kuying and a rod and Reel from Tsurinoya off the Ali website. My experiences have been just as smooth as using Ebay and most vendors on Ali take paypal so you get that protection. Shipping takes a little longer but I've never had something just not show up. When I went to the Ali site there were a ton of spoon options that came up. I quickly decided I liked the look of spoons from both Countbass and Yapada better than any of the others I saw. They looked a lot like what I was used to in the Daiwa's and Smith's. They also only cost between 1.51 to 2.55 each.

The Countbass spoons, of which I ordered 8, had remarkable paint jobs and were often different colors on both sides of the spoon. Both sides were finished as opposed to one being shiny brass or chrome. I liked that. They featured a single Korean needle point hook that was either minimally barbed or barbless. Most, if not all of these, are brass bodied spoons and not steel. I think these were 2.15 or so each and one of the slightly heavier models was 2.35. So I dropped about 20 dollars on them with free shipping.

They arrived the other day and I am extremely enthusiastic about them. I think they are every bit the quality spoon as the more expensive ones. The only negative I could mention is that they do not have a split ring or snap to tie to. Considering they are 1/32oz up to just under 1/8oz, I would imagine many UL spoon slingers would use a quick snap as I do, like one made by Decoy to effortlessly change baits out in an instant and that would be more practical than re tying every time you want a color or weight change. 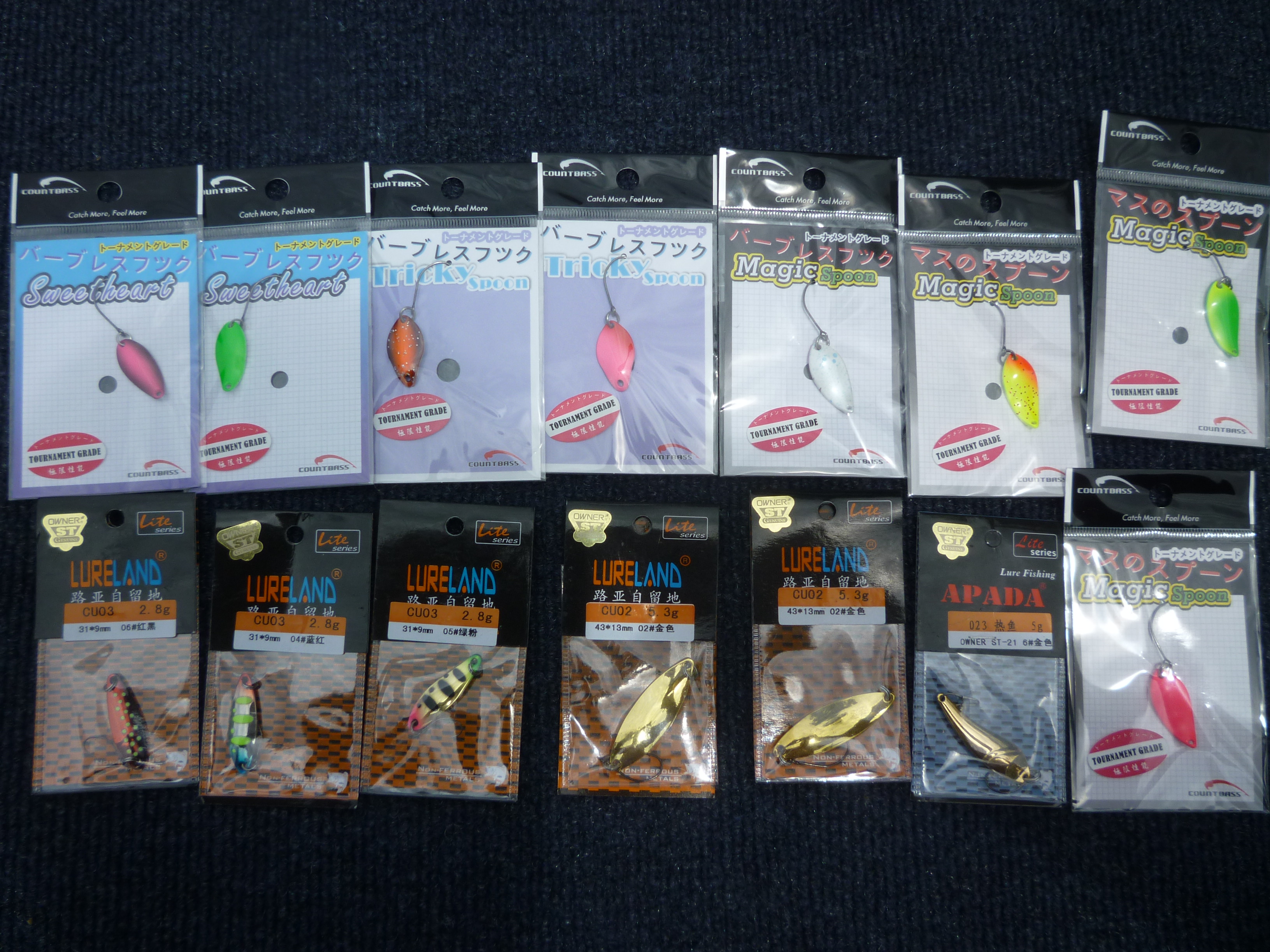 I ordered a few 5.5gram Yapada spoons in gold for light tackle red fishing and a small 2.3gram 8 spoon kit for trout that came complete with a zip style spoon satchel. I spent under 20.00 for these spoons and a couple of them were 1.50ea. The smaller trout spoons came with excellent paint jobs and finishes. They also come complete with an Owner ST21 single hook and a snap. Even more impressive is that they were a lot cheaper than the Countbass spoons. I threw a couple of each brand in my pool and they truly act and move like traditional spoons so there are no surprises here. I don't think the fish will know that this is CDM stuff and not JDM. 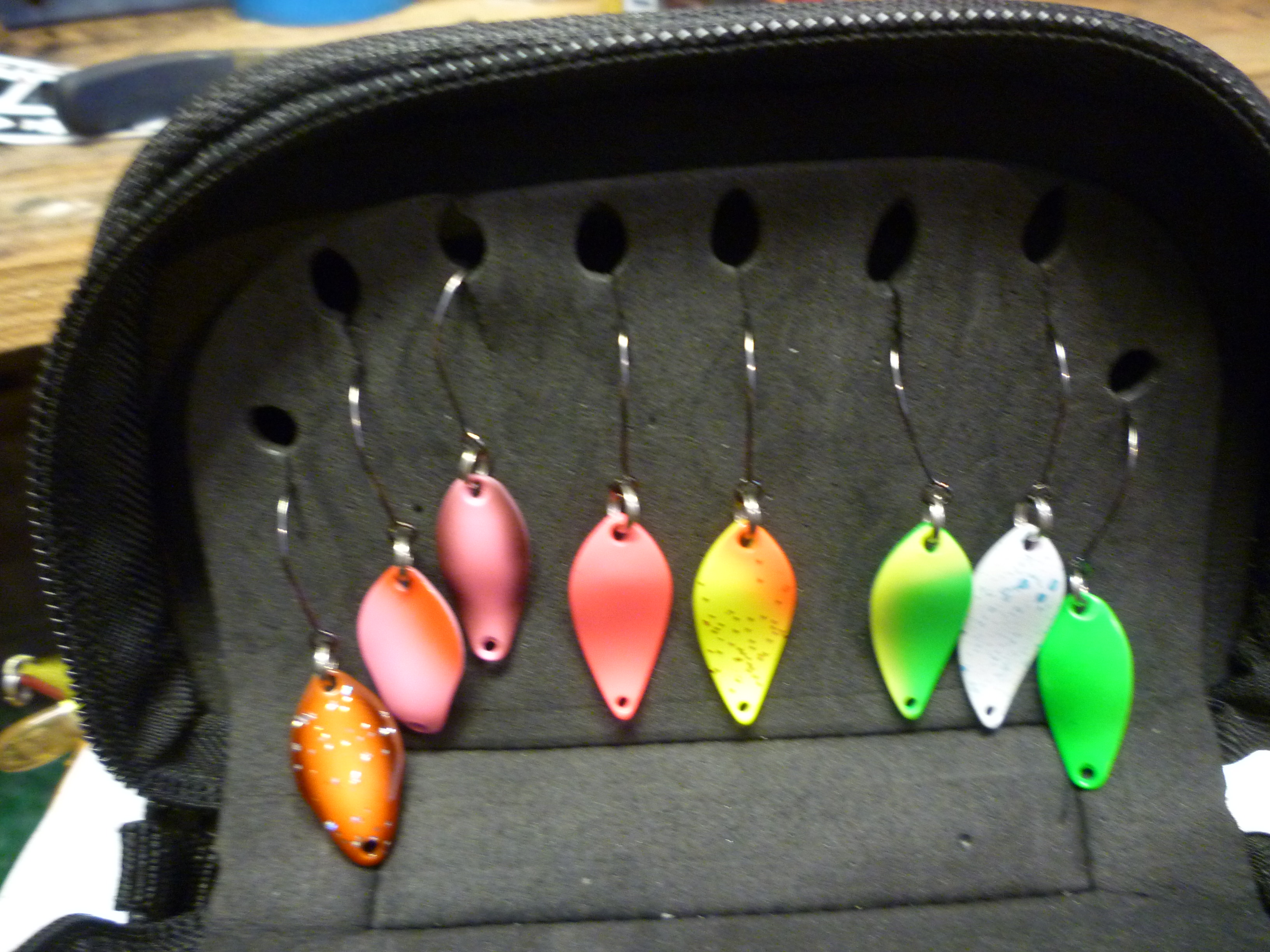 Apparently Ali is gearing up for some mega sale and these spoons along with lots of other stuff will be on sale starting on Fathers Day. There is still a ton of CDM stuff I would never take a chance on but the Kuying, Tsurinoya, Countbass and Yapada stuff is slowly making me reconsider some of these products. You can't go wrong here with this particular stuff. 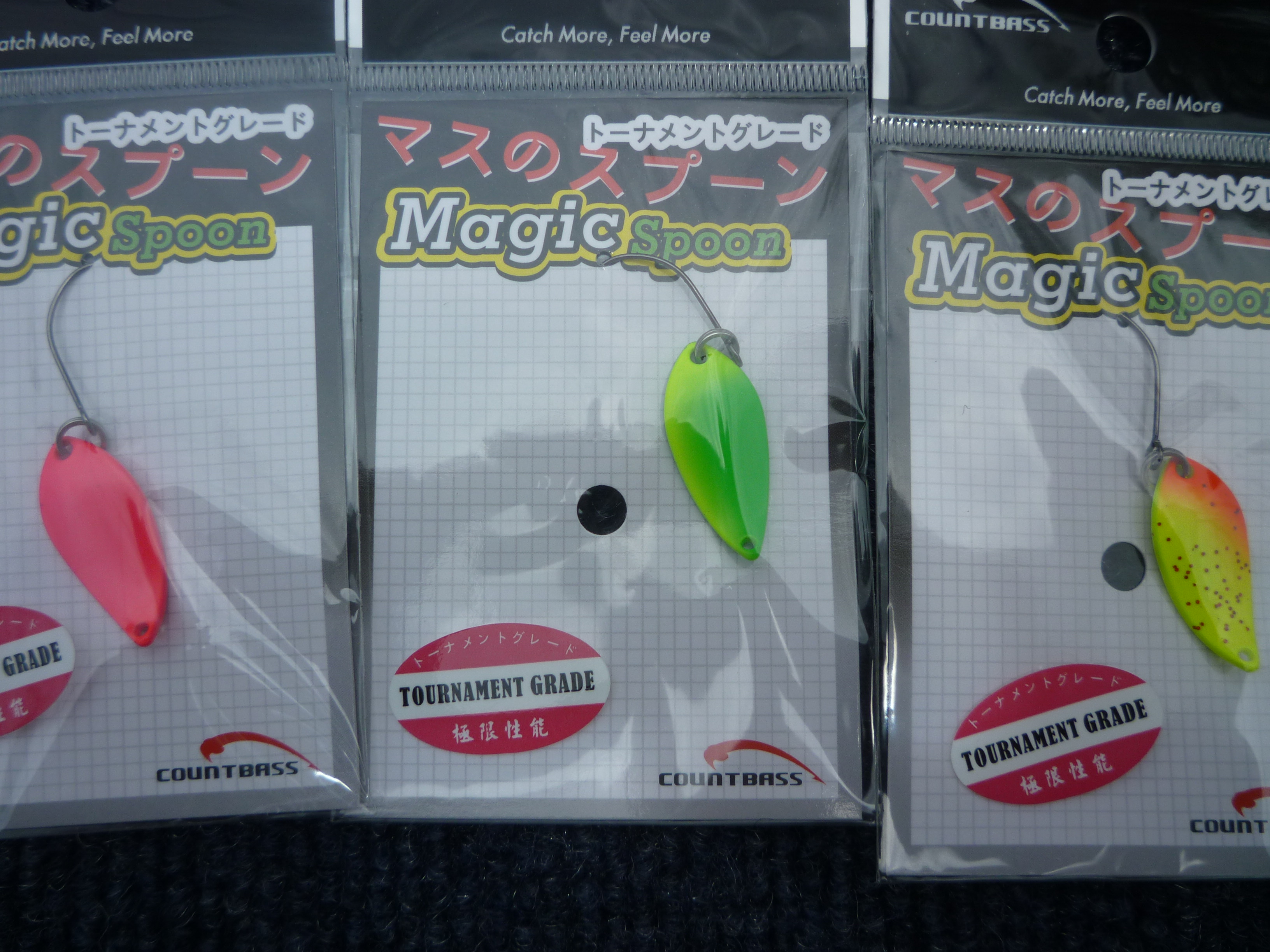 To me the JDM spoons are known and proven while CDM spoons (and other products) are a gamble. Like you, I’ve found brands on Ali that I’ve come to trust but getting there requires some research and experimentation. Recently received some Yapada spoons and they look great. Not familiar w. Countbass. Let us know how they perform.
Top

Ive been buying fishing related stuff off ali express for about a year now and have had good success and communication with vendors. Most recently bought a BFS reel off there, the Fishband GH100, and have been using it to cast micro spoons. I will certainly buy from the vendors you recommend.
Top

Never fished with spoons. I purchased some from Chris Stewart's site when I bought several JDM spinning rods and reels along with a BUNCH of tackle. After reading the OP's original post I bought some spoon blanks from Aliexpress and applied some powder paint but was not impressed with the results. Too much work for questionable returns. Blanks, powder paint, curing, adding quality split rings and hooks, the results (my results)were unimpressive. So I ordered some CDM spoons. They were hit and miss. Most weren't any better than my DIY versions. The LureLand and Yapada spoons were pretty impressive. Higher quality than the others. Looks wise they look comparable to a JDM spoon but don't how they will perform. I think the JDM spoons look better, the paint and finishes are superb, the hardware is high quality, the edges are smooth and rounded off and the weight stamps are clear and readable. I can see why they cost more. Depending on how many I lose and how well spoons perform for me will determine if I pursue fishing with spoons and whether I buy JDM or CDM

Top two rows are spoons from Chris Stewart's site, i.e., Daiwa, Shimano, Smith. The bottom two rows are CDM spoons, i.e. LureLand, Yapada and who knows (there are so many different entities selling the same stuff on Aliexpress). 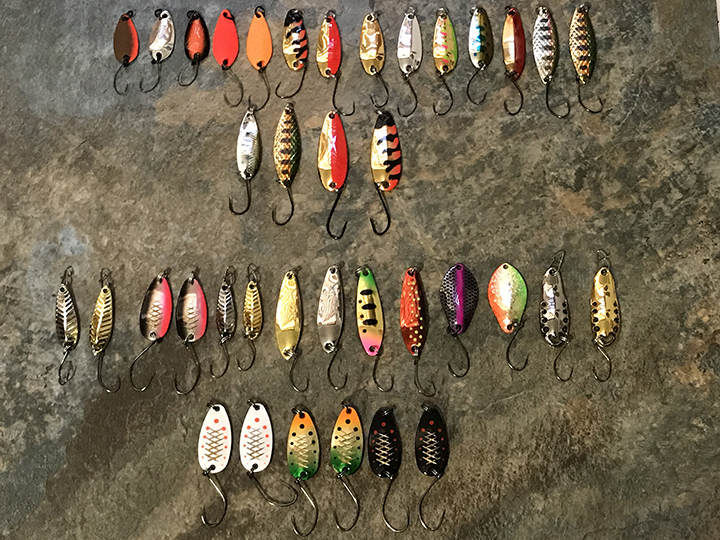 Homemade from spoon blanks. A couple turned out decent but overall too much work for too little return. 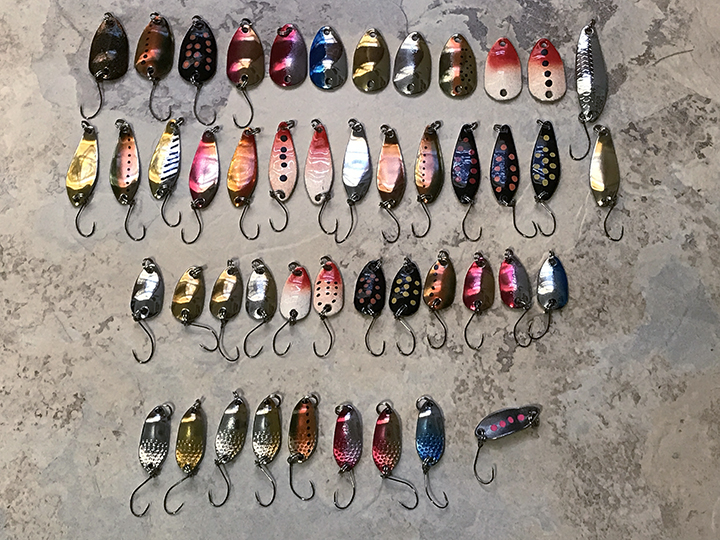 How long does it take to get orders? How do you sort through everything on AlIexpress? I have looked on there but have never been able to find what I am looking for.
Mike P.
Top

I'd say 2 to 3 weeks is relatively normal.
Top

I’ve placed 4 different orders and delivery time was usually about 3 weeks. Depending if the seller has items in stock and how long it takes to get through customs. I placed an order for 8 lots of finished spoons from the same seller and saw on the notifications that the processing will be “extended”. For the price it’s worth the wait I guess. Most sellers accept PayPal (not all) which adds a couple bucks to each order.
Top
Post Reply
7 posts • Page 1 of 1